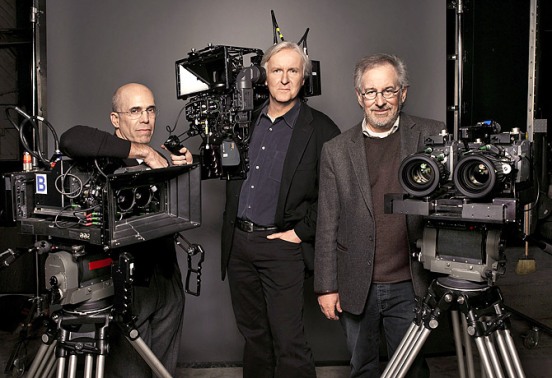 I’m always finding interesting articles on the net regarding modern film technique, but last week I came across a really marvelous audio interview with James Cameron and Steven Spielberg on the future of 3-D imaging in Hollywood cinema. The interview was conducted by Time magazine editor Josh Quittner and can be found here. It’s a shame that most of the interview did not make it into the relatively short article, but the audio excerpt with these two filmmakers reveals a remarkable discussion about film technique, history, and the fascination with immersive entertainment.

What emerges from this interview is a clear sense of each filmmaker’s personal perspective on the nature of cinematic storytelling and the role of high technology in the filmmaking process. With a firm grasp on the high watermarks in technological film history, Cameron appears to school Quittner on the basics: the coming of sound, color, widescreen, stereo sound, and 3D. He is comfortable referring to technique and artistry in early silent cinema as he is in recounting the economic history of modern 3D and IMAX experiments. He is also very confident mapping out where he wants to take live-action narrative movies in the next decade. He is undoubtedly a champion of 3D or stereoscopy, which he sees as a “pervasive if not ubiquotous” format in the next few years.

Alternatively, Spielberg reveals his skepticism towards a wholehearted embrace of a re-engineered technique that failed with moviegoers nearly 50 years ago. While Cameron insists that digital 3D is nothing like your grandfather’s 3D — which he likens to Arch Oboler and the anaglyph method (superimposition of two images) — Spielberg offers a more reserved appraisal. In his words, digital 3D constitutes a “revelation not a revolution,” an “evolution” of cinematic form but not one that threatens to eclipse standard 2D filmmaking. At least not yet. Spielberg’s skepticism is rooted in the fact that up until now no live action film has utilized digital 3D to tell a story without relying on z-axis tricks and showy effects.

Where Spielberg sees 3D as a ubiquitous element in modern animation (he is shooting The Aventures of Tintin in 3D), Cameron intends to be the first to introduce a new filmmaking vocabulary with his live-action hybrid, Avatar, which blends performance capture (what he calls e-motion capture) with live action elements and actors. But both men agree that 3D cannot save a poorly conceived film.

What is most fascinating, though, is the discussion about personal style and technique that reaches beyond 3D and reveals the creative process of each director. Cameron discusses his work in terms of control and harnessing the technology in order to push the medium. He has spent nearly a decade designing and innovating stereoscopic cameras and is figuring out new ways to shoot and edit stereo space. In the process, he is retrofitting Titanic (and potentially other films as well) to 3D, which will hit theaters sometime in the next year or two.

By contrast, Spielberg states that he has no desire to reformat his old films, since they were not shot with 3D in mind. In a brief exchange, he goes into some detail on his shooting style, in which he plans each shot with one eye open, since it gives him a more accurate approximation of the frame as a 2D construct. On Tintin, which is due out sometime in 2011, he confides that for the first time in his career he is framing shots with both eyes open, presumably to better compose for stereo space.

Although I am currently entrenched in the world of sound space, I’m always keeping an eye on editing trends and the changing nature of spatial geography in contemporary movies. See this post, for instance. I have found that in order to really appreciate sound space, it’s important to consider image editing strategies as well. On the surface, Cameron insists that stereoscopic space is not dissimilar from 2D space, in that conventional cinematographic and editing strategies can be upheld. Which is why it might be more of a revelation than a revolution if conventions are merely tweaked, not redefined. No doubt we’ll still have shot-reverse-shots, dolly shots, montages, etc. Thus, Cameron appears to be trying to appease some of his director and cinematographer colleagues, who are reticent about shooting in HD and in 3D. Their hesitation stems — in Cameron’s view — from a lack of familiarity with digital tools, preferring instead to cling to their light meters and celluloid canisters. He’s asking them to trust him.

The challenge that Spielberg sees is a creative one that influences his decisions at the level of shot composition. Unlike animated 3D, which is not limited by depth of field and focus, live-action 3D is theoretically hampered by limited depth of field, especially in low-light conditions as Spielberg points out. In this way, he would need to map out the z-axis of each shot to ensure that certain foreground/middleground/background elements are in tight/soft focus to maximize (or minimize) the 3D “pop.” As he said, “You get more depth if you throw your foreground out of focus. It just looks deeper.”

Another concern for stereo space is the space between shots, or how 3D shots can be cut together without throwing too many depth cues at the audience. With shot lengths decreasing and framing fairly tight these days, how will filmmakers like Cameron respond? Spielberg seems to suggest that modern action editing strategies might not work with live-action 3D, especially if every shot is a maximized for its “3Dness.” The net result could be hundreds of shots with different depth cues, forcing the audience to constantly readjust what they’re looking at. Recently, my wife had trouble with the 3D work in Coraline for much the same reason: too much z-axis information across successive shots. 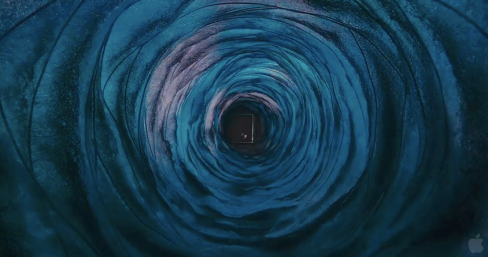 The spatial possibilities of live action stereo space have yet to be fully realized, but Cameron appears to be on the bleeding edge of innovating a stylistic language that may shape future uses of the technique. He is so convinced of digital 3D that he has no plans to return to 2D filmmaking anytime soon. On the other hand, Spielberg’s more measured response to both 3D and high definition (as replacement mediums for old-fashioned 2D celluloid) seems antithetical for a filmmaker who has been on the cutting edge of several modern technological innovations in movies: Dolby Stereo in the late 1970s, photo-real CGI in the early 1990s, and the use of digital pre-visualization tools in the early 2000s. But he and his longtime editor Michael Kahn continue to cut on film — instead of on a digital workstation. Walter Murch has pointed out that since the mid-1990s the only film to win a Best Editing at the Academy Awards that was NOT edited digitally was Saving Private Ryan in 1998.

The debate on the viability of live action 3D is only beginning, but these two perspectives provide us with a preview of the coming attraction. Interestingly, debates on the power of technology to influence the art and craft of filmmakers remind me of a Francis Coppola quote:

“People ask me if all this technology will make the movie any better. Well, no, technology doesn’t make art any better. Art depends on luck and talent. But technology changes art.”

In the 1970s Coppola was on the forefront of digital editing and shooting, decades before high-def was a household term. In a fascinating new book called DroidMaker, Michael Rubin explores the ways in which Coppola and George Lucas attempted to redefine how films were produced, shot, and edited. Rubin paints Coppola as a bold showman who refused to see the limits of his vision, so much so that his expensive experiments eventually led to bankruptcy, and nearly ruined his career. Lucas, on the other hand, was less reactive and took a more cautious approach to the digital revolution. He took smaller steps, which arguably paid off in the long term. It’s hard not to see the comparison with 3D today. 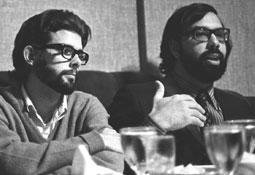 While Cameron and others are pushing hard to get more theaters converted to digital, he cites Lucas’ original digital cinema plan as a good effort but not enough to convince exhibitors across North America that digital is the way of the future. Lucasfilm had originally hoped that exhibitors would be quick to convert theaters when it was revealed that the last two Star Wars films were intended to be shown digitally. Gentle nudging didn’t do it, so Cameron is hoping that a more aggressive campaign –and perhaps more impressive films — will convince audiences to demand the change. As Hugh Hart recently noted in a Wired article, “No matter how deep the 21st century filmmaker’s bag of tricks, digital sleight of hand won’t rescue weak performances or lame dialogue. Despite elaborate green-screen backdrops painstakingly scanned into existence by hundreds of visual-effects techies, The Spirit flopped.”

Even more impressive than the coming of live action digital 3D is the extent to which the film industry has already adopted 3D digital imaging technology to create virtual sets for pre-vis purposes and, more impressively, for set creation and extension. These effects aren’t limited to expensive blockbusters, either. For United 93, Paul Greengrass shot much of the interior plane footage in a 50-foot section of an airline cabin. In post, Peter Chiang and his crew of digital artists extended the partial set to include more rows and other details for 30-odd shots.

Even though the most impressive examples of digital set design still stem from summer tentpoles and actioners, the artists responsible for these creations insist that their best work should go unnoticed. Production designer Alex McDowell has noted that, “For me, it’s about creating a machine that both contains and triggers narrative. At the beginning of a film, these new tools allow us to set up a kind of test-control space where you throw ideas in and test them against the logic of the storytelling.”

There are some remarkable things happening with virtual sets and digital extensions that go unnoticed by most of us. McDowell’s tools are quickly becoming conventions of the trade, as indispensable as mattes were in the studio era. Coppola is right: technology can change how artists think of their medium, but it will never change the artist’s desire to tell a story. If we think too big about the challenge of 3D and the wealth of options it gives to filmmakers, we may end up losing sight of these more modest and subtle changes at the level of production design.

The history of film is filled with oracles, prognosticators, visionaries, and showmen. The industry itself is also remarkably conservative when it comes to technological innovation and diffusion. But these aren’t entirely incommensurable. Despite what some might say, it took the release and success of Star Wars in 1977 to push exhibitors to install the Dolby cinema processor in order to decode the multichannel sound track. And it took Cameron and Spielberg’s persistence with Industrial Light & Magic — not to mention Dennis Muren’s creative genius — to produce groundbreaking CG work for Terminator 2: Judgment Day and Jurassic Park. The technological history of the movies is as fascinating as it is incredibly predictable and slow. When Cameron speaks, we should listen, but we should also listen to Spielberg’s cautious optimism, which is in my view a far safer bet. We’ll just have to wait and see. Avatar is still eight months away.