As the year draws to a close and the movie award season gets going I have begun to look backward. Customarily I immerse myself in the latest releases and play catch-up with the critics. This year, however, I have the urge to look back on film history and discover some films that got away. In this respect, my move back to Toronto has been terrifically therapeutic in that I am finding the energy and time to devote myself to movie watching, which is something that was ironically lost during my years of B.A., M.A., and Ph.D. film course work. As I stare down the long gun barrel of my Ph.D. thesis I am returning to the safe confines of the (home) cinema, where I am finding new things to admire, discuss, and even write about.

Lately, my attention has been captivated by two filmmakers in particular: Samuel Fuller and Jean-Pierre Melville. There isn’t much connective tissue between these two directors, nor would I impose any arbitrary similarities to the two of them, but their work blends effortlessly. As a student at the University of Toronto and Carleton University I had very little exposure to Fuller and Melville, except some passing references in course readings. (I can remember one article referring to the glories of a Fuller close-up, and I am still trying to decipher what makes a Fuller close-up a Fuller close-up). The recent discovery of these filmmakers was made by accident, I suppose, much like my interest in Westerns was fueled by an undergraduate essay I wrote on the music of Ennio Morricone.

As cinephiles I cannot help but think that even as we mature in our taste, we cling to the fundamentals that structured our initial love for the movies. While educated in the finer points of movie snobbery, I still hold dear the deceptively simple power of genre cinema, from 40s noir to 50s sci-fi all the way to 70s Italian horror and AIP exploitation. This curiousity has also deepened my interest in film music recordings, which has led to some wonderful discoveries: the cool and methodical writing of Jerry Fielding, the eccentricities of Jerry Goldsmith’s 1970s sound, and the diverse works of Michael Small.

More than anything else, my taste has expanded over the years, which has made me more open to different avenues of cinema. For me, that is the real test of cinephilic maturity: the ability to grow into other modes, genres, periods, and styles. Such detours occur spontaneously, without planning, and account for real moments of discovery and surprise.

My changing taste has endured one casualty, which is a thickening skin. There are fewer breathtaking moments of genuine surprise. You can’t fall in love with movies for the first time again. The early experiences that made your imagination race and appetite grow feel more tempered and controlled now. Movie maturity brings a heavy nose of nuance, which replaces the punch in the gut. Can you really marvel now at Hitchcock’s elaborate camera movements with the same kind of enthusiasm that struck you as a teenager? I used to worship at the alter of Psycho, but now treat it with a clinical distance that befalls so many films of my youth. They become exercises in analysis instead of emotional experiences. Which is why I hesitate to study certain films, to put them under the microscope and lay bare their mechanical and technical properties. I would sincerely love to write about Back to the Future — my favorite film — but I know better than to do it. It’s like Captain Miller (Tom Hanks) in Saving Private Ryan holding his memory of the rose bushes to himself, keeping it a mystery to his soldiers and the audience. There are some things best left unanalyzed.

Now, it’s about the subtleties. My latest discoveries hinge on a greater corpus of films, which is why I don’t think I’d be so taken by the films of Fuller and Melville if I didn’t know what came before and after them. Their work stands out to me because of the nuances, the small stuff. A tilt or pan, a particular framing, a certain way of using environmental sounds.

I came across these directors by accident a few weeks ago on a trip to the video store, but it is startling to see how well they go together. With Fuller and Melville I have unconsciously turned my attention to the era when men wore hats. I said earlier that there isn’t much connecting Fuller and Melville, but I can’t help but think Melville admired the street-wise Fuller, who was enamored with the dark alleys and lonely lives of “cannons” [pickpockets] and the disillusioned. Both men were boisterous, provocative, and perhaps more famous than any of their films. Melville’s white Camaro and stetson set him apart from other New Wave directors, who pushed against the walls of classical American genre cinema. Melville — if I can extend this metaphor — painted those walls a different color but relished living inside them. Fuller, with his briny New York-ish accent and trademark cigar, used his camera and sound track to enhance ordinary tales of human greed, sacrifice, and heroism. Their films are tightly edited glimpses into a strange world that feels far removed from our own.

Larger budgets alluded both filmmakers, but they did the most with minimalism. In fact, Melville made it an art. Fuller moved his camera to approximate movement, but knew when to leave it still. Martin Scorsese has said that the beating sequence in Pickup on South Street is particularly brutal because the camera is locked down. As Joey strikes Candy and drags her across the room, we witness it in a medium long shot. It unfolds in one shot, unlike the final subway fight which is cut in a more conventional way with establishing shots and closeups for emphasis. There’s no need to emphasize Joey’s behavior with Candy because Fuller demonstrates it with a cool, detached camera angle. Scorsese uses a similar technique in the pistol whipping scene from Goodfellas.

Melville’s characters are no less violent, but he rarely attempted such brutality. The closest we come is the strangling at the beginning of Army of Shadows, which achieved real horror not from the image but from the sparse sound track. The silence of the room is shattered only by the muffled cries of the captive traitor. In Le Samourai, Alain Delon’s methodical assassin, Jef Costello, is so icy that the opening murder is accomplished with clinical flair. Melville’s title character is detached and sworn to a code like a Japanese samourai, but owes an aesthetic debt to Alan Ladd’s Raven from This Gun for Hire. Both find themselves attached to female nightclub entertainers. However, throughout Le Samourai and his other noirs — including Le Deuxieme Souffle and Le Doulos — Melville builds his narrative out of extended silences and what can only be called an existential quality that evades most American precursors. Melville’s authorial stamp is, indeed, comprised of homage and extension. It’s easy to see how he extended the quintessentially American crime film to include a distinctly French attitude. These films are steeped in American tradition but drip with French personality. 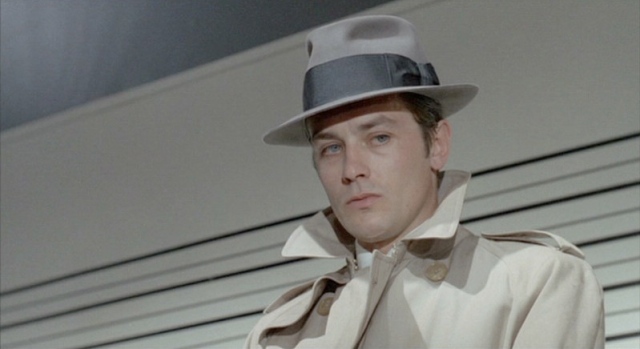 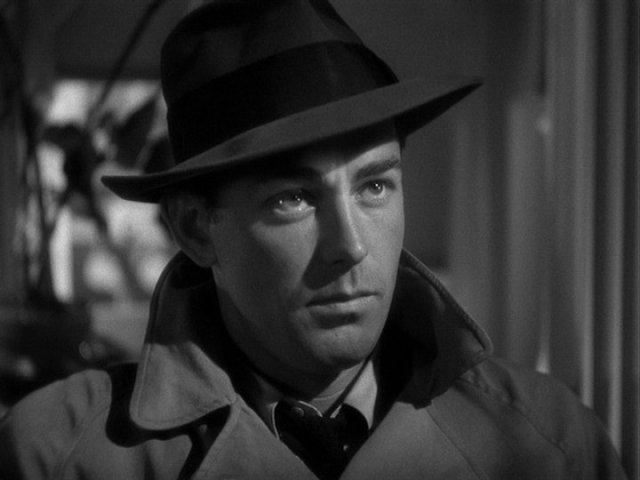 As one French filmmaker put it, Melville lets his compositions “breathe.” His mise en scene is decidedly sparse, especially in Le Samourai and Army of Shadows where characters are often shot against a deserted background. In his color films, skin tones are more blue-green than pink, drained of any warmth. It was said he hated warm tones. As a result, the sound tracks often fill in the missing details with effects and musical cues that stress the loner qualities of the characters. In Shadows, the sound of wind and the ocean fills the empty space by enhancing the desolate environment. In Un Flic and Le Samourai, raindrops compete with near silences and distant traffic noise. It is as if Melville insulates his characters in the sounds of the real world, but separates them visually by placing them in empty rooms, on empty streets, as lone wolves on the hunt.

Fuller, on the other hand, used his technical skill to fill the frame with objects and movement. His use of black-and-white CinemaScope in Forty Guns is remarkably innovative for its time: extreme closeups and low angles that we once thought were the sole property of Sergio Leone. In the Poetics of Cinema, David Bordwell breaks down a complex shot from Forty Guns involving a pyramid of action using the extremes of the CinemaScope frame and deep focus. In the early days of Scope, he notes that Fuller fully illustrated “what could be done with nearly all the items on the menu.”

The subtleties of these films showcase the real artistry of their creators. Melville once said that he didn’t believe filmmaking to be a true art because of its collaborative nature; real artists were solitary workers, much like his protagonists. On the other hand, Fuller seemed to embrace his auteur status bestowed to him by French critics and American filmmakers. If there is any connective tissue between these two men, I believe it’s in the details. They certainly didn’t redefine the medium, but then again I seem to be drawn to crafstmen who work within the walls of the studio playground. Sometimes the very best in innovation and experimentation happens in there.

And to think I have not even touched on Fuller’s war films like The Steel Helmet, Merrill’s Marauders, Fixed Bayonets, and The Big Red One. Another post, I suppose. My tastes might have changed, but I’m as curious as ever. The wonderful thing about the movies is that there’s always another that you haven’t seen, just waiting to be discovered. One thought on “When Men Wore Hats”